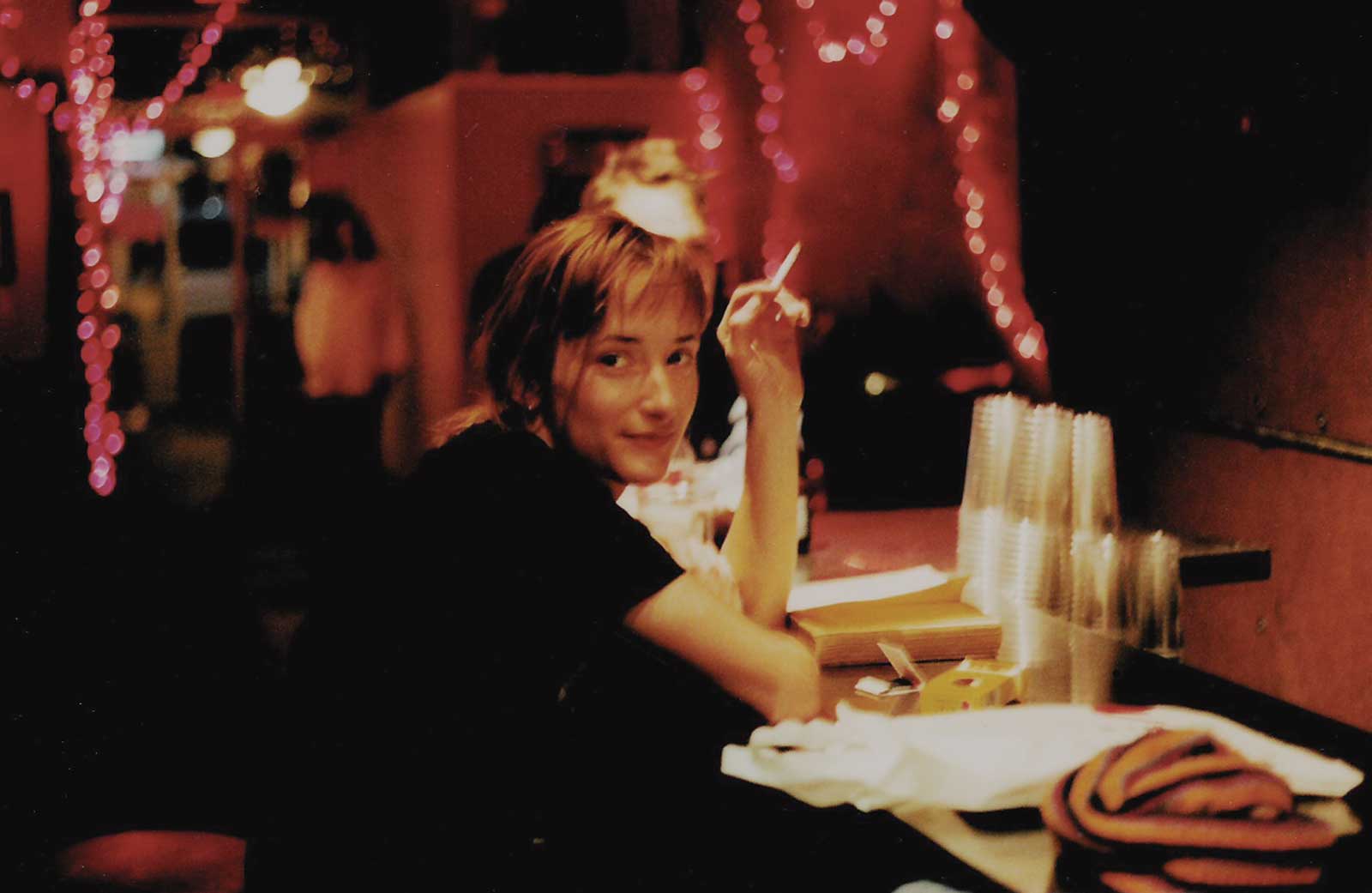 An interview from 2002, shortly after the release of A School Of Secret Dangers

Where do you live? (feel free to elaborate on your space/environment if you think that’s relevant to your music)
currently in a old haunted house with no heat in north portland. it’s like camping. i saw the ghost three times the first night i moved in but we had a talk and ever since he has been cool.

How long have you been making music?
since the swingset

Who/what inspired you to get started with your musical alter-ego?
the costumes and superpowers.

What kind of music did your parents listen to?
they aren’t really into music. it was more my older brothers and sisters were playing the records in the house. my one brother liked led zeppelin, AC/DC and black sabbath, the other one was into george harrison and credence clearwater revival and another one liked the police and prince and david bowie. one sister liked zz top, aerosmith, joe walsh and molly hatchett, and another one liked ELO, the rolling stones, 70s songwriter guys, fleetwood mac and disco.

What are some songs that you cover?
i just learned “another sleep song” by graham nash. we played “friends” by led zeppelin and “deed i do” by bert jansch at our last show. i learned “old man” by love but haven’t figured how to play it live yet because it is so delicate without the whole gorgeous arrangement. we cover “program ten” by the dreamies on the new places album and a syd barrett song was on the last album. i covered a heatmiser song on my first album. some others recently or not…”clarity” by james mcnew, “anymore for anymore” by ronnie lane, “they took away the diesel” by michael hurley, “all i want” by joni mitchell, “i won’t hurt you” by the west coast pop art experimental band, “all is grace” by will oldham…lots and lots of songs. sometimes i hear a song for the first time and get posessed by it and need to play it. other times it takes a while of loving it to come around to how i could play it. i usually can’t play one straight and end up doing it different somehow, with phrasing or rhythm or key changes but love and respect always. i want to learn “too much on my mind” by the kinks next. or “part of the 6-teens” by the sweet!

Do you play in other bands / projects?
nothing official right now but i have been threatening to start a lite-rock cover band called “us”. we’d play all lite rock songs for real not as a joke, like “everything i own” by bread, “all i need is the air that i breathe” by the hollies, gerry rafferty “right down the line”. i have recruited all members and now we just have to belly up. then there was the hobby metal band called the metal detectors which would have songs about the hunt for civil war era munitions and scrap metal from viking expeditions, but instead you just end up digging up lots of beer can pull tabs and matchbox cars. but people didn’t seem too into that one.

Do you have a job? What do you do?
currently i am a cook at a tavern out on the portland highway. it is the easiest job i have ever had–no take out the trash, no clean the bathroom, no wash the floor, just cook, do the dishes, drink your free beer.

What’s the worst job you’ve ever had?
well most work is service jobs and any service job puts you pretty deep in the human psyche shitstream. it’s just a matter of time before something happens and you are fired. i’d rather clean toilets than wait on people, and i have.

How did you come to work with HUSH (I mean, what on earth were you thinking?)
i think chad came to see me play five or so years ago at the little basement bar on grand avenue and asked for a song for the hush holiday comp and i wrote one and the next day rob jones recorded it on his 8 track. ryan stowe played his fender six and and ben barnett played drums in ben’s old basement. it was really fun. it was in an open tuning and somebody said it sounded like a particular sea and cake song that i have yet to hear.
What have you been listening to lately?
there is no end to the amazing records. someday i would like to have 1,000 amazing records that i love dearly each and every one. and listen to them all. in new york we stayed for a while with my friends warren and casey who have so much ridiculously good stuff i had never heard before, we’d go from scandanavian free jazz from the 60s to long lost albums rediscovered, to rocket from the tombs, to the mysterious texan, jandek. some great records i just got turned on to are graham nash’s two first solo albums, “wild tales” and “songs for beginners” and thin lizzy’s first album. i have been listening to marc bolan’s first record as t. rex. quixotic’s latest album. led zeppelin III. i am a sucker for rush “hemispheres” which we listened to in the van about 8,000 times. last weekend it was nothing but the christian metal band trouble but that was due to extenuating circumstances and a brownout. i love the kinks “village green preservation society”. i love ray davies. right now on the floor in my room i think is a pile that may contain a psych rock mix tape my friend made for me, willie nelson “the sound in your mind”, america’s greatest hits, small faces “there are but four”, pink floyd “a pillow of winds”, joe walsh “barnstorm”, brian eno “taking tiger mountain”, “aerial M”, demos of television before they made a record, fairport convention “what we did on our holidays”, a takoma records comp from the 70s, led zeppelin “houses of the holy”, miles davis “live evil”, jesus lizard “goat”, ELO “out of the blue”, stones’ “beggar’s banquet”, donovan’s “gift from a flower to a garden”, michael hurley “first songs”, wire “pink flag”, bert jansch’s first album and my “jam on it” single from eighth grade.”wanna buy a bridge” comp of rough trade singles. there’s more.

What do you like to do when you don’t have to do anything in particular?
play music, hang out, listen to records, write, read, go see music, make collages and iron on t-shirts, drink, go to thrift stores, walk walk walk and look at the river, camping trips to look for abandoned pioneer houses.

Whose voice resonates with you most?
oh jeez where to start. colin blunstone? bryan maclean? steve marriott? phil lynott? sandy denny? alex chilton? george harrison? tim buckley? sometimes it is a guest singer on a jazz song or one song on a field recording of folk or blues music or music from outside the western song-oriented thing that slays you.

Who do people compare you to? Do you get it? Is it at all useful?
well that all depends on what people listen to, everyone has a different framework. that can be good and bad. there’s the whole unfortunate “if it’s got tits and a guitar and it’s the year two thousand and whatever, it must be cat power” mentality. cat power’s great and all but those people need to get some more fucking records. it seems to me that it is a very big pool that everyone has been pulling songs out of in their own way, hearing in their own way, for a long long time. not just the in the last 5 or ten years, and regardless of being XX or XY.

What is your opinion of the Portland music scene?
people work really hard here. it is very supportive. there is so many good bands that i think it can be a little taken for granted.

What are your favorite Portland acts right now?
the reeks and the wrecks. dead moon. the bugs. also pseudosix, the juanita family, 31 knots, party time, the thermals, delorean, sleetmute nightmute, the swords project. the birdnest brothers in any combination, lots of great and different kinds of music being made here.

Do you tour? Do you like to tour? Where have you been?
yes. i love touring more than anything. all around the USA and a little in canada. i would love to get out of north america and tour some other countries!

What’s your song writing process?
over, under, through. over, under, through. throw into a black hole or easy bake mini-wave oven for 37.5 light years. but i don’t think you can have light years in black holes, cause they suck up everything. and easy bakes only work right when you’re listening to “rockin the paradise”. then go get it from the other side. sometimes it’s easy. sometimes it takes a while.

How many songs (roughly) have you wrote? / Recorded?
hard to say with all the ones that get away. always little songs running through my head that get away. maybe have recorded a hundred or more? before i made any records i used to make tapes of 4 track recordings and give them away at shows and always be updating them with new songs. before i had a 4 track i recorded songs on a boombox. before i had songs i made radio plays and prank phone calls.

How many releases have you bestowed upon the world (what are they)?
1996 a song on an arena rock recording company comp called “fuel”
1997 a song on the hush holiday comp called…i can’t remember!
1999 “which one’s you” on hush as amy annelle (which was a limited release and is out of print)
2000 “the autopilot knows you best” with the places on absolutely kosher records
2001 a places song on a contact records comp of portland bands
2001 “a school of secret dangers” on hush as amy annelle
just finished a new places album that we are looking for somebody to put out
have sung on recordings with 31 knots, peace harbor, the swords project, ben barnett…um…

What are your top three favorite songs to perform?
that changes all the time but it’s usually whatever is newest.

What do you want people to do/feel when they listen to your music?
woah that’s hard to say. i am glad when people listen

What is the most rewarding aspect of making/sharing your music?
“makin music with my friends”. touring. meeting new people. making albums. playing music in a different place every night. when people really love a certain song and tell you a story about it.

What bums you out about it?
booking tours is no fun until you get in the van and are like, “aaaaaaahhhhh yeah!!!”

Any regrets with your music career?
that my diesel van is in a coma right now in front of the house and has been for two months because it won’t stop raining long enough to fix it

What is the future sound of [yourself]?
blood and death. bunnies and puppies. starfish and thunder agates. lite rock and mystic metal. who knows.

Anything you want to say to your adoring fans?
hi. where are you?

Anything you want to say to perfect strangers reading this?
hello.

Any links, releases, relevant info or whatever you’d like to pass on in closing?
the places will have a web page, someday, someday i will learn how i swear. [see highplainssigh.com] the new places album is done and will be released hopefully soon. another solo album is underway. did you read this whole thing?