This dispatch just in from Nick Jaina:

Today we are officially starting our Spring tour of the Eastern half of the United States. We start it in Idaho, which is not very East, but if you’re coming from Portland it’s a good enough drive that you can fall asleep in the backseat on the way. So we are East.

I have a mostly different band backing me up than I usually have. This tour features a new drummer named Andrew and a new trumpet player named Jon, who replaces the old trumpet player named John. We’ve reduced one letter from the trumpet players name, which over the course of a month will save us some money. Also with us is Thomas on electric guitar and William on upright bass, both of whom have toured with the band before and know that unrealistically high expectations are the enemy of a good night’s sleep.

Also, we have two videos out and another one coming soon. The most recent one is for the song “Sleep, Child” which you can view here

If you don’t own the new album already, I graciously ask that you consider buying it. It’s the main way that we are able to have the money to drive around the country and play shows for people. If you’ve heard a few songs or seen a video and have been entertained, please think about how much of a difference it makes to us if you buy the album. Even if you don’t like having cds around, those ten or twelve dollars go a long way for us. You’d be surprised how few cds are sold online anymore. I appreciate you even reading these words and considering them. Nick Jaina’s made really good records in the past – really good records. We’ve involved him here on a number of occasions for such reasons – these really good records. But he’s made a spectacular jaw-dropper in the just released “A Bird In The Opera House,” an album that startles and makes you swoon to it and its easy beauty. Its songs are full of delicate loves and the troubles with them, floating on flimsy clouds and negligent stars/moons and sentences, working themselves into heady folk country as well as undeniably sleek and ruffled pop in the style that George, Paul, Ringo and John used to make way back when. It’s an album that is somehow entirely his own and yet incorporates some of the finest young songwriting voices and styles into these dozen songs of widespread texture and discourse. There are elements of Vampire Weekend’s Ezra Koenig, Luke Temple’s new Here We Go Magic project and more, affecting us in a way that feels like tickling feathers and tickling fires, like a night cast as a tipsy lover, and a lover that still has us entranced by every movement and every syllable. It’s also a lover who’s not at all completely figured out – still shaky and still a bit of a mystery, even after all this time. We’re going home with that lover – it was going to happen like that anyway – but it all feels perfectly in place.  read more.

Portland alt-folk bandleader Nick Jaina, is a fine writer of prose and if it weren’t for his infatuation with music and performing he’d probably be sitting up in his room churning out novels instead of songs. His band, featuring members of Jolie Holland, Loch Lomond, and Laura Gibson, is the result of playing in the streets, touring, sometimes living hungry, and sometimes selling out shows to his ravenous fans. His latest album, A Bird In The Opera House, releases today on Hush Records, and FILTER is happy to exclusively premiere his video for “Sleep, Child,” directed by Tim Nelson. 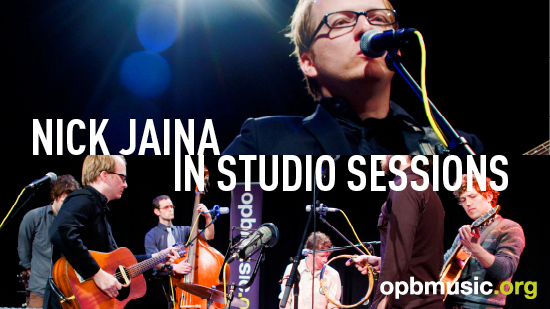 “A Bird In The Operahouse” Out Now.

Magnet Magazine wants to know what album you’ve been looking forward to this week.  Naturally there’s only one right answer:

A Bird in the Operahouse is out today at finer record shops and here at The HUSHshop, with a limited stock of signed copies still available!  Now available with an instant download.

The CD Release Show is tonight!  (Friday, April 2, at Doug Fir. 9 pm. $10. 21+.)
“A Bird in the Opera House” marks a significant development for Jaina and by extension the city’s music scene. Recorded by no less than a dozen Portland-based players, who serve in an equal number of projects, this stands as another example of a communal project by local musicians with worldwide potential.

More than any other local songwriter, Jaina songs beg to be read, labored over and deconstructed. On A Bird in the Opera House, his fourth full-length for Hush, his words are still the first thing you notice.