On the topic of live performance in unexpected contexts:  here we have Ritchie Young entertaining public transit-goers on Portland’s semi-iconic MAX train performing “Wax And Wire” from the stellar Night Bats EP.

The trend of impromptu musical performances in ‘street’ contexts captured on video may have started in the old country but Portland’s Penny Jam and San Fran’s upstart Left | Right Hand and more recently Seattle’s OnePot.org with a hand from Chase Jarvis put their west coast spin on the concept. See Ritchie Young performing at an improvised dining event at Sand Point Naval Air Station, Seattle, WA.

Rounding out a trifecta cavalcade of live video announcements, we have the positively luminous performance of Loch Lomond at The Woods for the Night Bats CD release.  All in attendance witnessed a stirring evernt.

Watch more performances by Loch Lomond in a video playlist

Since that performance thae band completed a rewarding west coast, without wasting a minute.  Several live audio and video tapings are expected to hit the nets shortly.

Ritchie also took time to give this illuminating interview with Oregon Music News, which details the fantastic muses behind writing the lead track “Ghost Of An Earthworm” and title track “Night Bats”.

The first two songs on Night Bats – “Ghost Of An Earthworm” and the title track – have a fable like quality to them. What was the inspiration behind these two?

When I was 14, I saw an episode of Ripley’s Believe It or Not and in it was an Indian peasant who in his backyard saw these giant glowing earthworms. About six months ago, I had this really vivid dream that I was one of those worms but that I had swallowed a skeleton and could walk around. “Night Bats” is essentially a love song about a person I was dating. She was very much a day person and I was very much a night person, so there was this real love/hate relationship in the way we looked at the world. It showed me that you can be not right for someone but still care about them very much. So, I put that in a fable setting, and wrote a not vague metaphor for that situation.

It’s gorgeous!  Then buy the CD here (also gorgeous!).  And, definitely do not miss the CD Release show at The Woods, next Tuesday November 10th.

The Portland sextet makes a second stop by our studios at the end of a busy year, capped off next week by the release of their Night Bats EP. They talk music videos (specifically, this one), Bee Gees covers and the name change that wasn’t, and shed some light on the full-length they’re prepping for a 2010 release, Little Me Will Start a Storm.

Look for three Oregon dates from the band surrounding the Night Bats release: Nov. 9th at the Pendleton Center for the Arts in Pendelton; Nov. 10th at The Woods in Portland; and Nov. 11th at the Univ. of Oregon in Eugene. They then begin a string of dates down the California coast at the Hotel Utah in San Francisco on Nov. 12th. Plus, don’t miss Loch Lomond on an upcoming edition of OPB-TV’s Art Beat, including footage shot during our session. 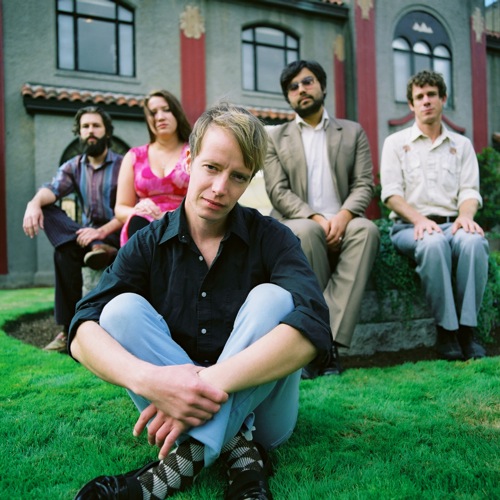 A stunning glimpse into the Night Bats EP is now made public with:

Hats off to the Penny Jammers!  It doesn’t take a special camera to make the photegenic band look great, but they are sounding particularly great in this live performance of “Ghost Of An Earthworm” (track 1 on the new EP) hosted at The Ace.  Nice work audio engineers!

The tempo might come as a surprise to some.  Who would have thought Loch Lomond was ready for Mtv-esque jumpcuts?

“Behind all its ornate instrumentation and chamber arrangements, Loch Lomond is a pop band. You could always hear it in spots—the gentle chug of “Field Report,” the plucked strings and gallop of “Blue Lead Fences”—but never before has the six piece band been in full pop mode. Until now.

In the 26th (!) edition of the Penny Jam, Loch Lomond play its new and super poppy song “The Ghost of an Earthworm” in the warm, book-bound confines of the Ace Hotel.  Man, Loch Lomond is on a serious R.E.M. kick. And I have no problem with that.” – Michael Mannheimer, Willamette Week

Peep the new Pennyjam site, hosting a flickr set of the shoot.

And put it on your iThingie via the podcast to share with others:

All preorders will be signed by the band and arrive at least a week in advance of release date (Nov 10)! ORDER NOW the HUSHshop.

2009 has been a banner year for Portland’s Loch Lomond, punctuated with triumph, tumult, and above all, artistic growth. Night Bats, the band’s first physical release since the much-loved Paper The Walls full-length and the follow up to their digital-only Trumpets for Paper Children EP, captures Loch Lomond at a unique and singularly brilliant time in their evolution as an undeniably powerful creative unit.

Having toured extensively this year with The Decemberists and Blitzen Trapper (among others), Loch Lomond now emphasizes in its new recorded output a directness and sharp pop sensibility that was only hinted at previously. Lead track “The Ghost of an Earthworm” is a shimmery, hooky gem devoid of much of the chamber instrumentation that peppers most of Loch Lomond’s catalog (here, replaced with bright electric rhythms, making it perhaps the most straightforward song the band has ever recorded); they even cover the Bee Gees’ “Holiday”(from Bee Gees 1st). “Spine (MMIX)”is a dramatically different reading of one of singer Ritchie Young’s most-loved songs, highlighting the band’s musical muscularity.

Title track “Night Bats” is as expansive as it is arresting, and is, along with “Ghost of an Earthworm”, one of the most shining examples of Young’s exemplary ability to tell bizarre, often allegorical stories with stunning dry wit and biting precision. “Wax and Wire” is, simply, quite possibly the richest and most jaw-dropping track Loch Lomond has put to tape.

Loch Lomond on video, to tour with Blitzen Trapper

An appetizer for their western dates with Blitzen Trapper: