Graves played an art opening at Seaplane last week. Here are a couple of highlights:

Dustin Hamman resides in The Columbia Gorge, just outside of Lyle, Wa on an idyllic and rough-hewn 40 acre micro-winery. In this wild place he conjured up the songs which comprise Oh When The Wind Comes Down. The following video does a good job of relating the sense of place, backed by birdsong and breeze, that informs both the content of Dustin’s songs and character. Beyond enjoyment of the song, it’s worth watching to the end to catch Dustin’s remarks about glimpsing a rainbow while performing on camera; an endearing deflection which sums up Dustin’s unassuming point of view and gentle demeanor.

Oh When The Wind Comes Down (album sampler)

Run On Sentence Tours by Train 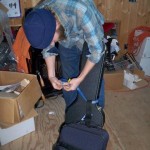 Dustin Hamman–also known as Run On Sentence–is taking to the rails to bring you his music. Here Dustin demonstrates his incredibly mobile touring rig: a guitar case with a skateboard truck screwed to the bottom and a petite suitcase with merch and essentials. I don’t think it could get anymore compact or environmentally conscious. Don’t miss him in your neck of the woods! (Tour dates in right sidebar, natch.)

Here’s a few highlights from a recent Norfolk show including some new songs, “Hiding Home” previewed on our free DECA compilation, and “The Opinion Song” from a forthcoming TBD release.

Norfolk & Western – “The Opinion Song” from HUSH Records on Vimeo.