A couple songs from Run On Sentence’s recent show with Elf Power and Vic Chestnut.Â  Be sure to make it out to the Run On Sentence Portland’s CD Release Thursday Nov 20 @ A Roadside Attraction with Heroes and Villains and Part Time Pony!

Run On Sentence - "The Afterlife Pt II" from HUSH Records on Vimeo.

Run On Sentence – “Do The Jellyfish from HUSH Records on Vimeo.

“Episode number seven of the fantastic Razing Mississippi series finds Laura Gibson at the wheel of a catepillar um… um… machine? Seriously, what the hell does that thing do? I’m a limp-wristed word pansy, so my knowledge of macho construction equipment is not too sharp. Anyone?

But what I do know about is the gorgeous music of Ms. Gibson–the flower growing through the cracks of the industrial cinderblock wasteland that will someday soon house the new Mississippi Studios venue–who debuts a new song, “Spirited,” in her performance here.” – Ezra Caraeff, End Hits 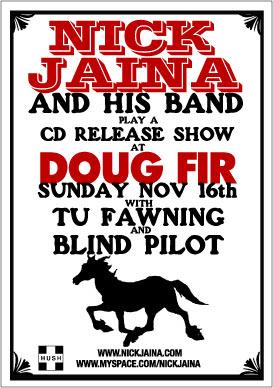 Nick Jaina has been tirelessly touring (see sidebar for NW dates happening over the next week). This should ensure an effortless and rousing performance at the upcoming not-to-be-missed CD/LP release party.Â  You can catch up with the Bard of indie with his most recent diary entries presenting the polar opposite ups and downs of touring in only a way Jaina could:

“See You In Heaven If You Make The List”

“Misuse of The Bassoon”

But more than that, what we would like to impress upon you here, right now is that with A Narrow Way Nick Jaina and his band have created an incredible album that you simply must own.Â  Listen:

“Walking Into A Burning House”

“Nick Jaina is my kind of guy. He loves good melodies and carefully-crafted words, well-structured chord progressions and the clever turn-of-phrase.Â  Feel the energy in the recording [and] notice how wonderful and immediate a song can sound when captured all in one take (as every track on Nick’s upcoming record, A Narrow Way, supposedly was). Take notice of the bells, the hand claps, the added voices at the end. All of these things were placed there carefully, lovingly; they all want you to sing along…” – Everybody Cares Everybody Understands

“Were Nick Jaina to completely abandon melody and meter, his songs would still hold merit solely on his strength as a writer. Seven albums of exploration into love, sex, religion and death have already established Jaina as one of the Northwestâ€™s foremost songsmiths and with A Narrow Way the troubadour moves dangerously close to matching the intensity of his musical arrangements to the heartbreaking momentum of his storytelling.” – Willamette Week 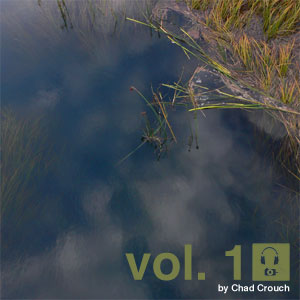 If you’ve been following this space, you know that Podington Bear was recently ‘unmasked’ as Chad Crouch, the owner/worker of HUSH records. Just before finishing his campaign of 156 songs as Podington Bear, he began working on another batch of music that was intentionally different: short, simple, atmospheric, moody instrumentals …. These compositions were intended to be “scores to single-frame films”. That is to say, Crouch’s photographs. Have a look at soundofpicture.com (click ‘pop-up player’ there for a quick dose).And try before you probably don’t buy (it’s offered free/value?) by subscribing to the podcast, or listening to this here sampler:

Sound Of Picture Vol 1 collects the first 20 compositions (with their corresponding photos embedded as album art).  A soothing and evocative accompaniment for a misty autumn drive/walk/ride/sit.

But that’s not all! Now you can submit your own picture to be immortalized in sound. Send Flickr links, Picasa links or attached jpegs (3mb or less) to soundofpic [at] gmail.com for consideration. If chosen your picture will be translated to sound free of charge, and shared with all who care to listen.