We are pleased to offer up some totally FREE musical gifts to you today from Podington Bear. The Lost Album collects the last 11 original songs posted in the run up to number 156 in the P Bear Podcast, whereas Remixes Vol 1 collects the remixes peppered throughout the year.Â  The Box Set, also available in the shop as 10 CD set or download, collects the rest of P Bear’s considerable catalog.

A couple of teaser mixes to give you the feel: The Lost Album & Remixes Vol 1.

Something super sweet for you from the new Greg Olin concern dubbed Solid Home Life. He hasn’t strayed far from the Graves signature sound, but my what a foil he’s found in vocalist Lindsay Scheif! Check out “Petting Zoo”. Looks like Super 8: 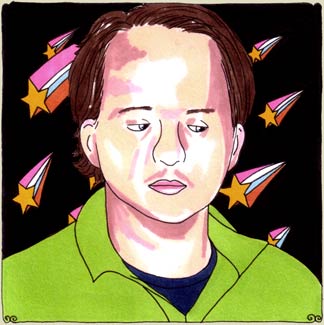 Nick Jaina and co. had the occasion to stop through Rock Island Ill. on their last tour and play a few songs at the Future Appletree Studio.

“Jaina is full of these musky moments of Sam Beam finding Jim Beam and having an alibi in something slightly more a Bridge Over Troubled Water way. He clings to his tenderness without letting it make him too red. Its a method to get to the crux of weariness, without getting too worn out by the business. His is a chilled bottle, a light fire, a calm temper that rummages through brush and the brambles to finally get into the clearing never getting too peeved, just brushing off his pant legs and pulling the burrs out of his shoelaces, throwing them onto the grass to the side. ” – Sean Moeller

Head on over and rest your browser a spell. As you can see, the caliber of writing and illustration are more than we’ve been conditioned to expect from the internet. Indeed, Daytrotter is a harbor of creative kindness and decency. Said one recently, “the cure to Pitchfork”.

One Hand Washing The Other

I Know I’m Your Man