All preorders will be signed by the artist and arrive at least a week in advance of release date (Oct 13)! ORDER NOW in the HUSHshop.

A Cave, A Canoo will mark Shortâ€™s third release on Hush Records. Captain Wild Horse (rides the heart of tomorrow) was released in Chicago in 2006, Water For The Day in 2008.

A Cave, A Canoo was produced by Short and Alexis Gideon and was recorded at Liophant Studios by Alexis Gideon, with some finishing touches done by Adam Selzer at Type Foundry Studios. The album was written and recorded over the period of a year, and its depth of sound reflects the wealth of time spent in its making. There was little to no pressure — be it financial or emotional — in its composition, allowing Short to focus her attention on the detail and nuance in each song. As a whole, the record is crafted with an interwoven, almost circular, approach, allowing the songs to slowly stretch out and find their home. Some songs took weeks to mull over and define while others represent first takes, captured at two in the morning.

â€œI was able to assemble and record the songs like writing a short story on a chalk board with a big eraser in hand, or like making a collage without using glue until the very end.”

In creating its so

Mike Johnson (of Parks & Recreation, Reclinerland) has once again teamed up with Grammar School Pictures for another deadpan short film. On the heels of the hilarious YOU ARE STANDING IN FRONT OF A CAVE, The End dives headlong into 99% pure monologue territory, über-minimal cinematograhy, and the pacing one might expect from Tarantino:

The 11+ minute static shot scene is impressive not only for Johnson’s uncut performance but, Shelby Lutjen’s (The Girl) as well, for not cracking up.

In the background are the strains of several HUSH songs appearing on the massive (28–mostly exclusive–track)  DECA compilation which recently celebrated it’s first birthday.  If you missed it the first time around, here’s an apt reminder to go and spend some time with it. FREE in the HUSHshop. 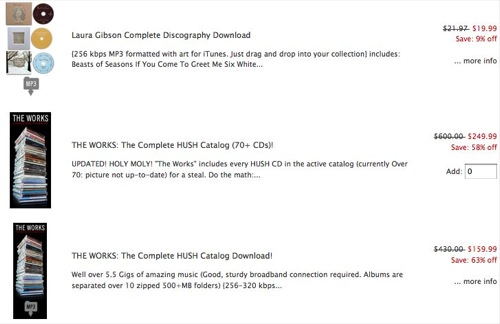 If you are the kind of person that must collect everything by the artist that catches your ear, or the label that snags your heart, this is a love letter to you.

We’ve just added all manner of digital bundles to our collection of, shall we say, bundles concrete.

Most notably our surprisingly popular “The Works” Complete HUSH catalog listing has been brought into the digital age with a whopping 5.5+ gig music download of well over 70 albums at a stupifying 63% discount (that’s 90 bucks less than the CD version and no hefty shipping fee.).Â  Look for more from Laura Gibson, Loch Lomond, Nick Jaina, Norfolk & Western, Kind of Like Spitting, Blanket Music, & Graves

The energy at the recent Nick Jaina show was palpable and dynamic at a recent show at The Woods in SE Portland (Ritchie Young’s [Loch Lomond] elegant, and all around pleasing venue) Some highlights:

Watch 9 songs from the set in a playlist at YouTube.