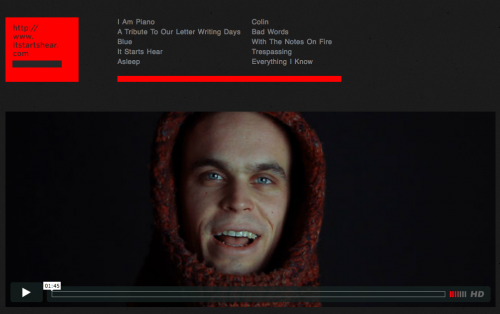 Peter Broderick has taken the wraps off the website that is his sophomore vocal album’s namesake.  On the surface, it offers streaming of the entire album, lyrics, media-rich liner notes and an invitation to share.  Spend some time with it and you’ll discover a beautiful mind at work and a hidden treasure trove. Just a few days before the release of Peter Broderick’s ambitious second proper vocal record (and matching website http://itstartshear.com, to be revealed on Feb 20), Peter has taken the time to answer some questions:

In terms of the album’s title and the website to which it refers, the idea of people downloading music and missing out on images, lyrics and more is quite a generous approach. Do you have any specific hopes or aspirations for the website?
When I started this idea of the website title, there were a lot of different incarnations it took of what it could be. It was meant to be a much grander thing with interactive webstuff but at some point during the process, I became really sick of the computer. I felt almost like I’d become a professional emailer instead of a musician. Then I decided to strip it back and take it back to the root of the idea which was just to share the ideas of the songs with people in a way that all the listeners or at least almost all of the listeners will be able to access. I just hope that some people will actually go there because I’ve written a lot of text for different things. I don’t even necessarily hope that people read it all because it’s a lot of information I’m putting up there. I just hope that people take what they want from it and listen to the music in a way that feels right for them. I’m very curious to see what happens…

Read the entire interview at DIY

Meanwhile, the UK press is beginnning to weigh in with glowing reviews:

“The Oregon-born multi-instrumentalist retains that glacial stateliness here over the course of an hour with ambition and vision.” -MOJO