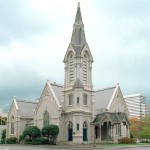 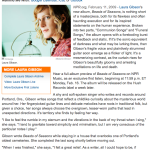 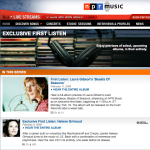 The Laura Gibson news ticker is spooling with news aplenty! Here are two events we wanted to ensure you know about.

1. We are thrilled to announce that NPRmusic will be featuring Beasts of Seasons streaming in its entirety all next week as a part of its Exclusive First Listen series! This relatively new feature of NPRmusic has formerly been reserved for legends like Bruce Springsteen, Neil Young and Paul McCartney, as well as indie heavyweights M Ward and Andrew Bird. So it’s a high honor and we’re thankful to be selected. From NPR:

“Laura Gibson‘s new album, Beasts of Seasons, is nothing short of a masterpiece, both for its flawless and often haunting execution and for its inspired statements on the human experience. Broken into two parts, “Communion Songs” and “Funeral Songs,” the album opens with a foreboding burst of feedback and static. If it’s the sonic equivalent of darkness and what may be lurking there, then Gibson’s fragile voice and plaintively strummed guitar soon emerge as a flicker of light. It’s a mesmerizing contrast, as the curtain rises for Gibson’s beautifully gloomy and arresting meditations on life and death.”

2. Next save the date: Thursday, April 2nd at the Old Church. From Laura:

“Portland folks please save this date. I will be joined by a special choir and the Portland Cello Project, and their will be a community potluck reception. It will be a beautiful night, and a fun time for all. I’ll send more details in coming days. “

Tickets will go on sale this week through Brown Paper Tickets. Remember: Early birds get the worm! 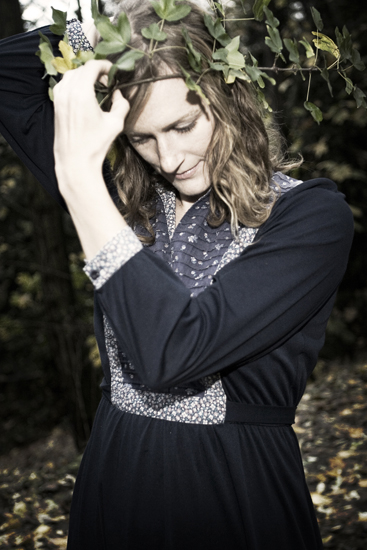 We are pleased to share the single from Laura Gibson’s much anticipated Beasts of Seasons with you. Enjoy!

In addition Laura’s myspace page will be debuting one song per day from the album from Feb 6-16th, at which point there’s another very special event we’re excited to share with you.

Preorder the CD and get Laura’s autograph with it! Or, order the vinyl LP that comes with a coupon for mp3 downloads.

“A bucolic collection of ruminations on mortality, these numbers are largely austere and threadbare, tastefully accented by rippling minor key piano, sawing cello, and the foreboding pluck of a banjo. It’s Laura Gibson’s wispy, fragile vocals that give the morbid subject manner a disarmingly self-aware grounding, as when she drawls longingly, “Shall I call your name, or learn to be alone?” on the lithe, slow motion sway of “Sweet Deception.”- Under The Radar

“It’s folk music like it ought to be. Delicate, but brave. Held up by a “flickering wisp of a voice suffusing the space with a warm glow.” I’d recommend this to any folk music fan or previous subscriber to No Depression. If you’re a fan of Sufjan Stevens, Iron & Wine, or Bright Eyes this record is for you.” – Muzzle of Bees

“Laura’s voice blends the line between child like innocence and that of a veteran chanteuse. She can captivate you with little more than a gentle picked riff and her voice, but her new record â€“ Beast of Seasons â€“ incorporates more textures and experimentation (including the swirling, fleshed out version of Where Have All Your Good Words Gone.” – Herohill

“Her vocals are incredibly clean and the songs are sweet but intelligent.” – Quiet Color

“There’s a sense of urgency to the record that is instantly appealing.” – Who Killed The Mixtape

“Spirited” is a pretty but multi-layered tune, and strikes me as a little more experimental than much of Gibson’s earlier output. Good stuff.” – Cable and Tweed 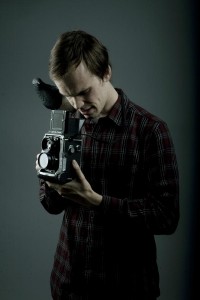 Wow.Â  That’s what the doctor ordered.

We’ve long admired Derek Hogue’s Gigpress wordpress plugin as a clean, robust solution for listing our artists tours and dates, but until today our page loading speed has suffered silently from a one letter typo in the source code which sometimes added an excruciating multiple-second delay to our homepage load in otherwise speedy surfing conditions. Now we feel like skipping!  Thanks Derek!